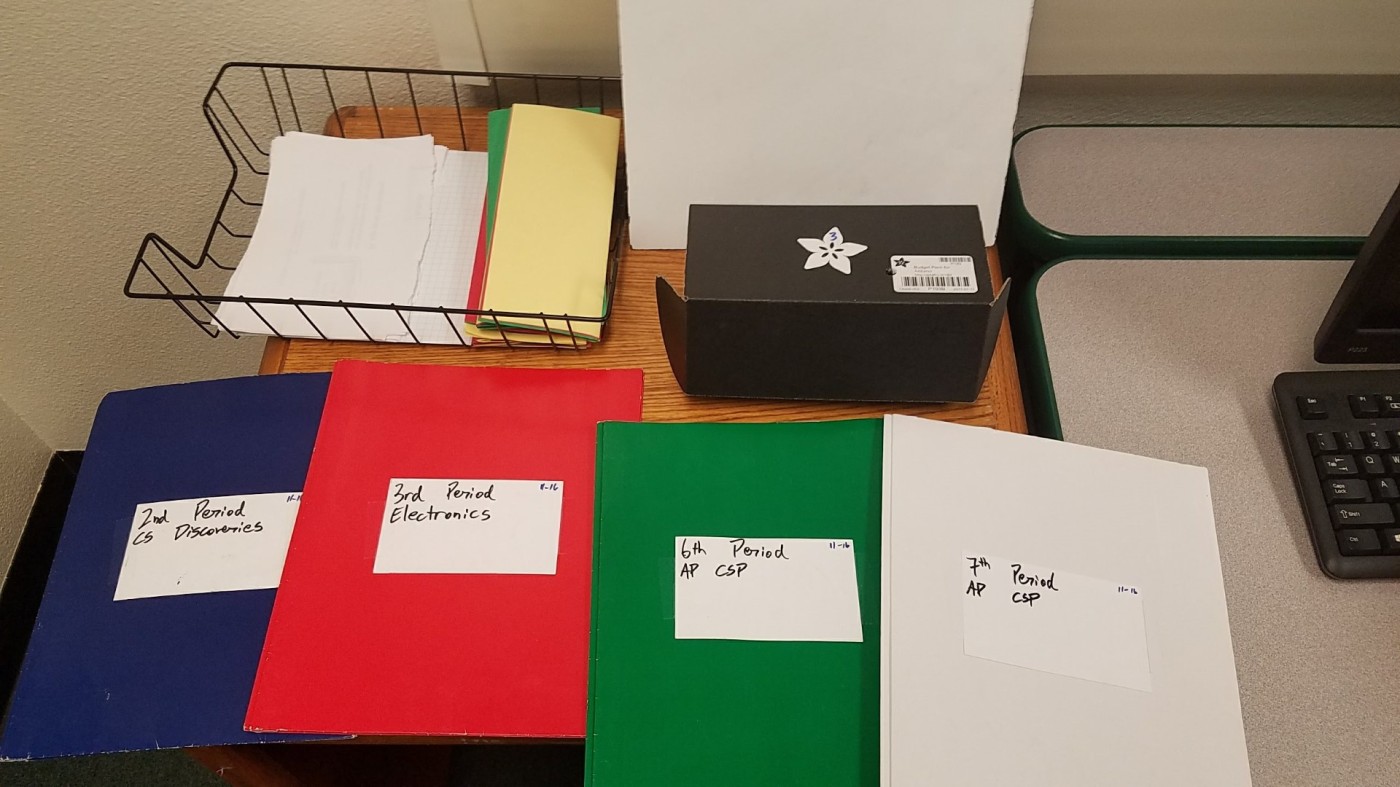 I teach in in a computer lab with some spacing issues – 32 computers organized into pretty close quarters. Here are a few pictures of my room both with and without students:

(Side note: these are from very early in the school year – I’ve since decorated my walls with posters. Just wanted to throw that out there…)

Maybe you can tell – once students are settled, it can be difficult to navigate this space: the walkways get crowded with chairs and legs and there’s no clear way to ‘circulate’ through the area. I have to be very conscientious about how I plan plugged vs unplugged activities – asking students to get up and move around once they’ve settled isn’t a super smart teaching move since I’ll lose a ton of time in transitions. But I knew that when I started the year: that I would need to be pretty intentional around those types of transitions because, if I wasn’t careful, I would lose instructional time.

What I didn’t expect was how much instructional time I would lose from even simple things like passing out papers or giving students supplies as they needed them (like whiteboard markers or scratch paper). I would find myself in the middle of a lesson needing to distribute papers, but then spend 2 minutes awkwardly passing papers to students and having to sometimes step over or step between students just to reach them. And, if a student wasn’t prepared with something to write with (which was sometimes reasonable, since we would often have weeks at a time where we only used the computers), then that student would also have to climb through the room to get something to write with and return to their seat.

Maybe more than impacting my actual instructional time, these moments definitely impacted the flow of my lessons. Students weren’t thinking about the task I had just presented but, instead, about how they would need to reach across a table for me to hand them a piece of paper or who they’d have to climb over in order to get something to write with. So, eventually I made a shift and started switching up how I distributed papers. I started using folders for each of my groups: 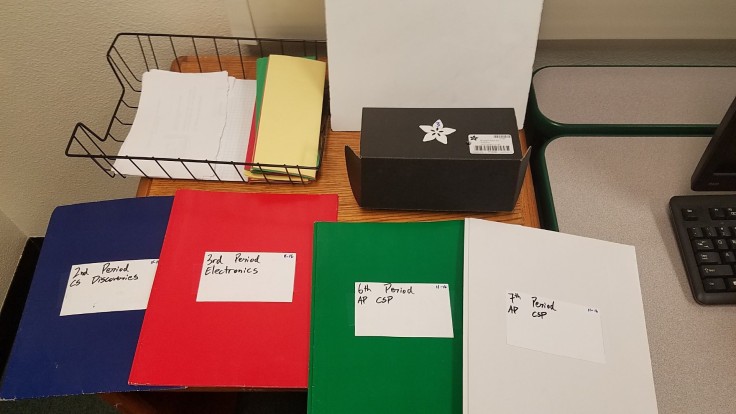 These folders (and some other goodies) would live in the center of each group. Each class period was color-coded with a different color. Before class, I put the handouts from the day in the left-pocket of each folder. During class, as the moment comes for them to start working on the assignment, I tell them to open their folders and distribute the papers to their group. Since each group has a folder, every group immediately has access to the assignment and can start right away, rather than waiting for me to walk from group to group distributing papers. At the end of class, if I need to collect something, I have them leave their work in the right-pocket of their folder. After class, I can grade whatever they’ve turned in and leave it in the folder for them to see tomorrow, along with my feedback. I guess this is an added bonus – this system also simplifies my grading and feedback systems since the work is already pretty well organized and doesn’t need to be re-distributed the next day – it’s already in a place where students can access it.

In the center of the folders, I would sometimes put relevant handouts for my classes (I don’t have any pictures of this =/ ). For electronics, this was sometimes a printout of the color codes for Resistors as we were learning them; for CS Discoveries, this was sometimes the HTML codes we had been learning and some examples (taken from the Code Studio map levels); for APCSP, it was sometimes important AP Information as we worked on the Create and Explore task (like deadlines, essential info, etc). Having a central place to anchor these resources made it easier for students to have something to refer to if they had been absent or were struggling with a concept – I noticed some students using these resources as a scaffold before eventually not needing to open the folder and double-check their thoughts. So that was also pretty cool.

In addition to the folder, I also put a little box with supplies in the middle of the groups:

Having supplies for students in a central location isn’t anything super new, but a personal revelation for me was that I could make the boxes big enough to hold whiteboard markers, erasers, and highlighters even though we don’t use these every day. Before this box, if I had a lesson that required one of these tools, I’d also have to spend time mid-lesson passing out these extra materials and collecting them at the end of the period – definite waste of time. But having it all in the box simplified that part of my class and reduced transition time.

Similarly, I realized I could keep whiteboards in the middle of the groups as well even if we didn’t use them everyday:

Again, saving me time from passing them out when I had a lesson that used them – everything they need is now in the center of the group.

I also added scraps of scratch paper underneath the folders in case I needed students to do some quick calculations or write down their thoughts. When a class isn’t super engaged or participating, one of my fallback strategies is to ask a more direct question and have them write down their answer so I can see their thinking – if no one is writing anything, they’re probably confused and I should clarify; if they can all write something, I can leverage that into the start of some social interactions to build the energy back up again. But anyway – all of that requires paper to be at the ready, which is why having scratch paper readily available has been super helpful. Without this, my little formative moment suddenly became an ordeal as students needed to get up and find paper, get a pencil, etc. just to write a 2 word answer.

So, this has been super helpful in my class to help maximize my teaching time and the flow of my lessons – smoother transitions from lessons to paper or from paper to computers, especially with my limited space.

Also, full disclosure: these really aren’t original ideas. Sam Shah wrote about similar systems with his math classes that I always had in the back of my head and adapted for my room. You can check out his post for even more ideas (from a math perspective).

One thought on “Organizing Supplies in a Computer Lab”